Road-users who were perhaps looking forward to enjoying easier journeys during this half term week due to reduced school run traffic have been surprised by experiencing the complete opposite!

Currently Teddington’s central roundabout is being rebuilt all this week leading to long tailbacks throughout the day in all directions. This roundabout was rebuilt several times in slightly different locations several years ago after the placement caused buses to strike it when negotiating the bridge junction. 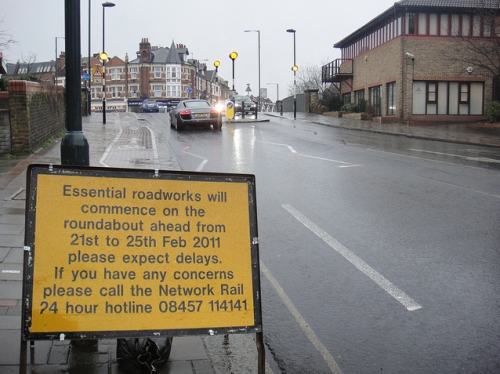 Signs before the work started

Elsewhere traffic into Kingston is severely affected by the Kingston one-way system being restricted to one lane in parts. More road works & temporary traffic lights on Kingston Road / Normansfield Avenue area and around Hampton Wick bridge that has reduced available lanes are compounding these problems further.

Road users are advised to expect much longer journeys – some bus users have spoken about journeys of well over an hour to Kingston (that usually less than 20 minutes) and traffic backed-up as far as Hampton trying to get to Teddington High Street. 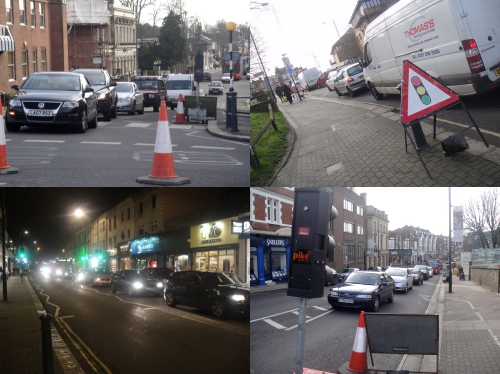 Traffic backed-up in all directions

Last weeks emergency gasworks by Southern Gas Network on Park Road (opposite the Police station) came under fire from commuters after the busy zebra-crossing was blocked and they found themselves dashing across the road in between temporary traffic light changes. This work is now complete.

[Update] these problems are being compounded even further by temporary traffic lights near the water treatment works in Upper Sunbury Road, Hampton.