Teddington Hockey Club has long been proud that it is the oldest hockey club in Britain and this year sees in the 140th year it has been in existence!

The anniversary celebrations will be held at the clubs annual dinner this weekend on the 26th March and will be hosted by radio and TV broadcaster John Inverdale.

After assuring their dominance of the South League Championship with a 6-3 win against Chichester, the Men’s 1st team have secured a promotion back to the National League. Their 17 victories from 19 league games ensured their win with three matches still to be played.

The club runs eight men’s teams, six ladies and one of the largest junior sections in the country. All age groups have helped mark this year’s impressive season – not forgetting the hard work from the clubs volunteers and the new all-weather floodlit astroturf pitch: all are coming together to deliver a club that Teddington can be very proud of. 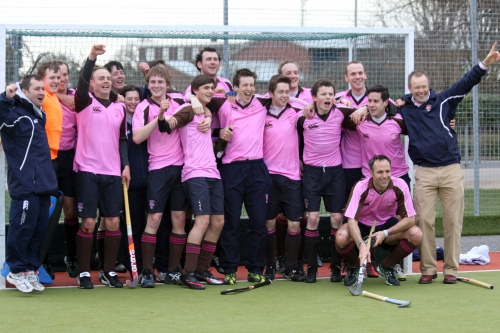 The Under 10 Girls team have secured the Middlesex Championship for the second year in a row and now both the the Under 12 Girls Boys joined them with the equivalent trophies on the 20th of March. Both teams now are to represent Teddington and the County at the South Finals on the 10th of April.

Not to be outdone, the Under 16 Girls squad will soon play in the England Hockey Junior National Finals in Canterbury after making it from the initial 70 clubs down to the final four.