A locally composed requiem is to receive first of two 2011 performances by Teddington Choral Society this Saturday (April 9th) to benefit a similarly local-based charity Princess Alice Hospice as part of the worldwide ‘Voices for Hospices’ fundraising event.

Described by the Richmond & Twickenham Times as ‘sheer magic’, it will receive its first of two performances this year at St James’s Church, Hampton Hill, on Saturday. For those who like what they hear, there will be an opportunity to join in its second performance of A Pilgrim’s Requiem at a Come and Sing event in aid of the Princess Alice Hospice on October 8th.

Teddington Choral Society (TCS) decided to perform this lyrical work, composed by its musical director Geoffrey Bowyer, twice in 2011 as part of its 60th anniversary celebrations. This year also marks the tenth anniversary of the work’s premiere at St James’s Church in March 2001, which was attended by the then local MPs, Dr Vince Cable and Dr Jenny Tonge. Dr Cable later chose the opening movement, Requiem Aeternam, as one of his nine musical favourites in Private Passions, broadcast on BBC Radio 3 in November 2009. 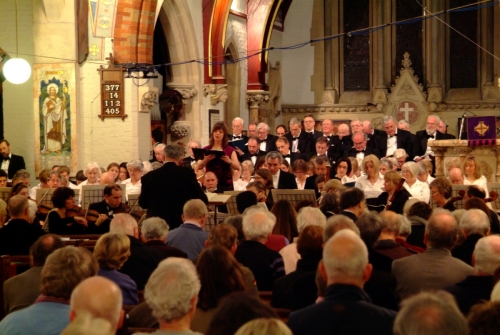 Saturday’s concert will also feature the popular choral work, Mass No 2 in G, composed by Franz Schubert for his local church in the suburbs of Vienna when he was just 18 years old. This short work fully demonstrates Schubert’s ability as a master of lyricism and innovative harmony.

TCS will be joined in the concert by professional soloists Lucy Thomas (Soprano) and Martin Johnson (Bass-Baritone) and a full orchestra, led by Denise Todd, along with Tenor Tony Dowson and Organist Patrick Martin.

Tickets for Saturday’s concert are available, price £11 (£9 concessions), tel: 020 8977 5986, or from Albert’s Music Shop, Twickenham, or on the door. The concert starts at 7:30pm. For further details, please visit the choir’s website at www.teddingtonchoral.co.uk.