Lord Heseltine visited LGC in Teddington this week to hear about the company’s successful growth during its post-privatisation as well as its future plans.

The former Secretary of State for Trade and Industry in John Major’s Cabinet at the time of LGC’s privatisation (in 1996) and now member of the House of Lords and the independent Chairman of the Government’s Regional Growth Fund Panel, met with David Richardson, Chief Executive of LGC. 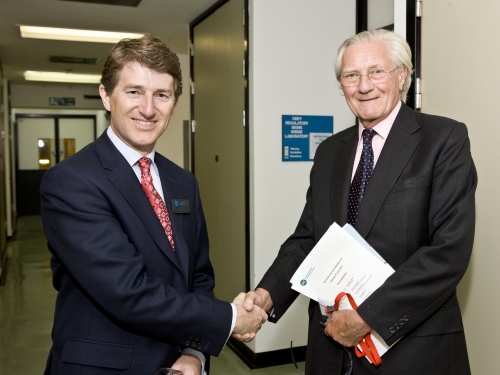 During the visit, as well as tours of the research laboratories, discussions were held with LGC’s senior management on subjects ranging from the proportion of LGC’s work that comes from the public sector, plans for working with governments beyond the UK, and the commercial implications of markets with different standards and instruments.

LGC’s investment in skilled scientists has brought domestic growth and international expansion – growing the original 270 staff than 1,400 today in 29 laboratories and centres across Europe and at sites in India, China and the USA (550 in Teddington alone).

Lord Heseltine was also briefed on LGC’s pioneering work in using forensics to solve cold case investigations, and by the prospect of advances in DNA technology and the ongoing policy and political implications of DNA records. Recent high-profile work includes forensic CCTV analysis which was used to link Levi Bellfield to the 2002 disappearance and murder of missing schoolgirl Milly Dowler.

LGC has also developed RapiDNA – a portable DNA profiling machine that could be easily carried to crime scenes and used to create a DNA profile in 60 minutes vs the current lengthy 3 day process.