Unprecedented recent events in London and now around the UK have many glued to rolling news trying to keep up-to-date with the situation.

Starting in central London, trouble hot-spots spread out from the epicentre and copy-cat incidents have affected areas as far south/west as Croydon and Ealing. Police today advised businesses and offices in nearby larger towns to close early today as a precaution (not due to any specific threats of information) – this included Wimbledon, Richmond, Kingston.

In a case of unfortunate timing, barriers had started to be deployed along the route of the Surrey Classic test road race planned for this weekend. Some residents mistakenly thought the barriers were intended for riot crowd control – this is not the case.

The race is still planned for Sunday and organisers believe it will not be affected by this week’s events. As Twickenham was one town where police had advised shops to close early, these barriers were earlier removed as additional precaution.

Teddington seems mostly unaffected today – Fitness First closed at 6pm and some local nurseries were advised by police to ask parents to pick up children early in case of transport issues. Police have advised businesses to secure their premises as much as possible and residents to call them if they suspect any groups are gathering – a few small groups have been stopped before any actions were taken in areas such as Kingston.

Richmond Council released a statement today in response to the situation to say that it was working closely with the police to monitor the disorder and keep contingency plans for the borough.

Cllr Pamela Fleming: “The violence we have seen over the past few days, with innocent people losing their homes and livelihoods is indefensible. There have been no incidents in Richmond upon Thames but we must be vigilant.

I would like to reiterate what the police have already said: Please can parents make sure that they know where their children are, and ensure they are not out at night. Also, I urge residents not to visit the areas that have had disorder to ‘take a look’. Spectators only make the issue more complex for the Police and often get in the way.” 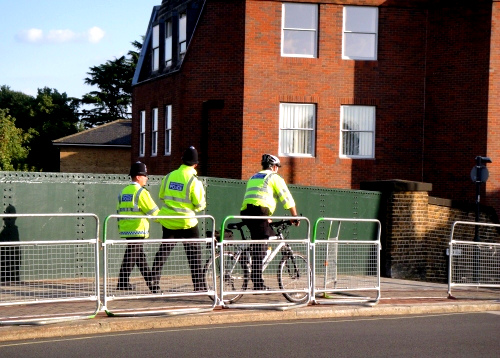 Police from the borough last night were deployed to Wandsworth, Kingston and Croydon as well as remaining in the area to keep residents in Richmond Upon Thames safe. In Teddington extra patrol cars, police and community support officers are very visible with increased patrols and shifts to ensure maximum cover.