The official planning application for the installation of the hydro-powered scheme on Teddington Weir is now online and anyone can add their feedback on the scheme before the decision is made.

So far public comments are a mixture of for and against – some whole-heartedly backing this attempt at harnessing some of the untapped hydro power and others that mention the scheme isn’t economically viable and will potentially cause damage to the environment. 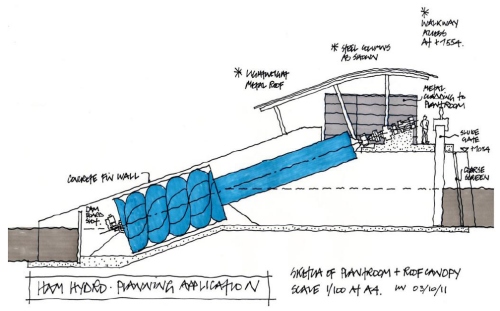 The group has also published its first newsletter “The Hydrograph”, designed to update followers on every aspect of the project with the latest news.

As well as corporate sponsorship, Ham Hydro has responded to calls for a method to receive smaller donations to help the scheme – you can now buy a brick to help build the project!

Just as final costs for construction are being confirmed, the overall financial model and project viability is at an important stage so any help with funding will ensure that plans can be turned into reality. Each donated virtual brick costs just £20 and your name will be added to the list of supporters.

Meanwhile upstream in Windsor, another hydro-powered scheme by Royal appointment will be providing approximately half of the energy required to power Windsor Castle.

This £1.7 million project just beats Teddington’s scheme to be the first of its kind in place on a weir managed by the Environment Agency and is expected to start producing power in the new year.