A free ‘Trolleybus50’ open day is being held at Fulwell Depot on Saturday 12th May 2012 to mark the 50th Anniversary of the last trolleybuses to run in London.

London’s first and last trolleybuses will be on display along with other classic and iconic London buses, including Routemasters. This important landmark in London’s transport history will celebrate the 31 years of silent service that trolleybuses gave to the community.

Just after 1am on Wednesday 9 May 1962 London’s very last Trolleybus service ran into Fulwell Depot, ending an era of overhead powered road transport. Thousands turned out to witness this historic event. 31 years earlier on 16th May 1931, London’s first Trolleybus service had gone into service from Fulwell. At its peak London’s Trolleybus network covered 255 miles of the capital and was operated by a fleet of 1,811 vehicles. 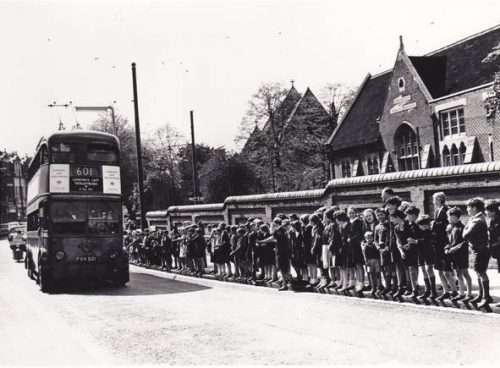 A number 1521 passes the pupils of St.Mary’s and St.Peter’s School on Broad Street (bridge approach), May 1962 Photo: Tony Belton

As part of the celebrations a frame by frame re-make of the classic film short ‘Twickenham to Teddington by Trolleybus’ made on the first day of operation in 1931 is being shot by local cameraman Alan Benns. The 2012 version will feature one of London United’s newest buses and Mayor Clare Head in equivalent scenes. 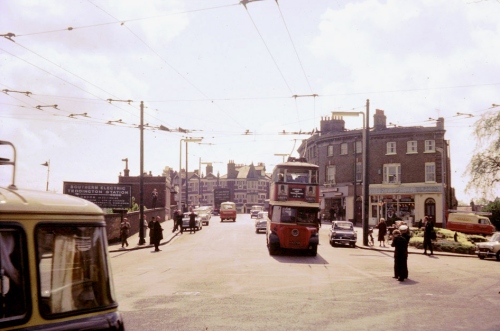 ‘Diddler’ Trolleybus on the High Street the other side of the bridge. Photo: David Bradley (more available of the last journey)

Souvenir programmes will be available from local shops including Teddington Waterstones from April with all the proceeds going to two local charities. If any local shops are interested in stocking leaflets or posters about the event, please get in touch.

Alex Juniper, Senior General Manager of London United Busways said, “Fulwell Depot has played a key role in the history and evolution of London’s trams, trolleybuses and now buses. I am delighted to be hosting ‘Trolleybus 50’. We look forward to seeing lots of people, showing them the vehicles and telling them about their fascinating history.”