The now world-famous NPL Water Rocket Challenge will take place this year in at the NPL Sports Club Field on the 20th June at 6pm.

This year, more than ever, you can take part yourself – participating in workshops where the organisers will help you create your own monster rockets to fly with the other participating teams. There are separate competitions for schools and other teams to bring their rockets and launchers along to compete. 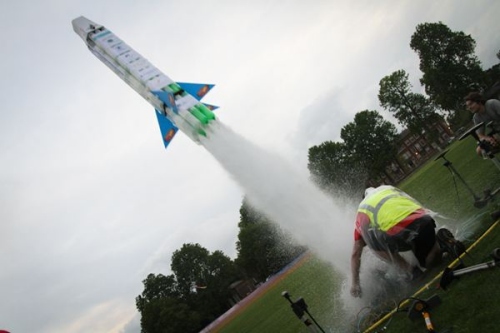 Guiness World Record holder for the world’s largest water rocket, as launched during the 2011 event.

All interested parties are welcome to participate or spectate on the day (general spectators evening only). The schools-only competition will happen during the afternoon and the evening session is open to all to join the ‘just turn up’ workshops. You don’t even need to build your own rockets beforehand.

For those seriously taking part, teams are challenged to land their rocket in a zone about 65m from launch position, to which is added the time of flight for overall score. There are three rounds, and there will be an “eggstra egg-based payload challenge”.

The NPL Water Rocket Challenge has been running since 2003 with almost 500 teams of six having participated. It has raised over £12,000 for charity and all proceeds from the day will go towards Shooting Stars CHASE Childrens Hospice. The enthusiasm for this event is spreading! The team at NPL have helped other organisations setup similar events including the Wales Water Rocket Challenge and at the Cheltenham Science Festival.

Registration is open for this event and there are only 45 launch bays available – book early to avoid disappointment. For further information email: waterrockets@npl.co.uk.