Following the increase in dog walkers using the park and a sharp rise in dog attacks by deer this year, Royal Parks are pro-actively advising park users about safety and have issued a press release with updated advice for dog walkers in Richmond and Bushy Parks.

Most strikingly, they are now advising that dogs are walked outside of the park during rutting (September – October) and birthing seasons (May – July).

Many locals believe that Royal Parks warning signs during these times do highlight some of the dangers but not clearly enough – walkers were still seeing their dogs being attacked by deer from a long way off despite staying away from nursery areas and keeping their dogs on the lead. 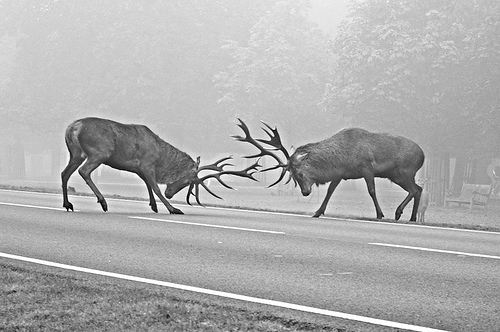 Also included in the advice for all park-users to generally speaking all year round, keep at least 50 metres away from deer (many take close-up photos, touch & feed deer). Also be aware of your surroundings and not walk between two rutting deer or a mother and her calf.

For dog-walkers specifically, it is natural for deer to feel threatened by dogs from a long distance away even when behaving well and being on a lead. During rutting and birthing seasons:

“If you choose, at your own risk, to walk your dog in the park at these times, it is advisable to keep your dog on a lead and consider an alternative route, such as following the wall line of the park where you are close to exit gates.

If pursued by a deer, let go of the lead. The deer are less likely to charge if the dog runs away from them. 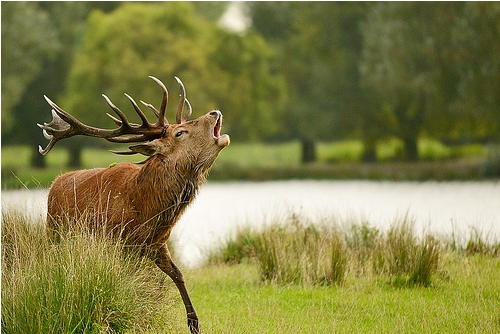 Park users should remember that deer behave differently during these periods, are more unpredictable and may cross roads without warning. Motorists should also take care to stick to the 20mph speed limit through the park. A deer was hit by a car last night on Chestnut Avenue.

Owners of dogs, who chase wildlife in the parks (not just deer) can face criminal prosecution – a man was recently fined £315 for allowing his dogs to chase ducks in Richmond Park. Deer are sometimes killed in dog attacks – three of these have occurred in Richmond Park this year.

Note also that some park-users walking or jogging on their own (with no dog present) are often chased and sometimes charged during rutting season.

[Update] Royal Parks will soon be replacing the current deer warning signs with these new ones that highlight the dangers more clearly: 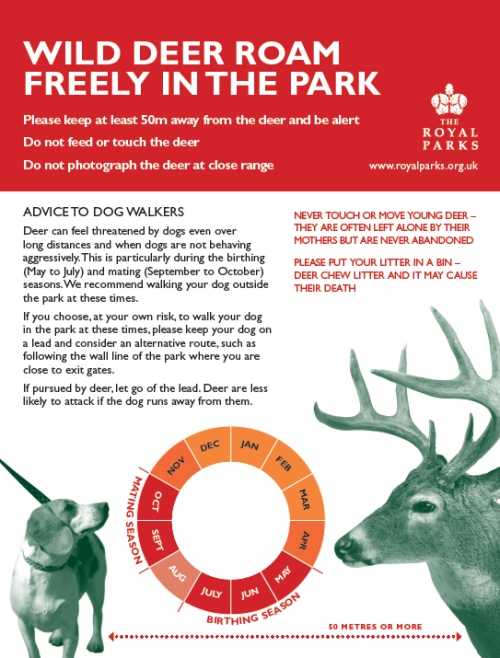