Rutting season is well underway and Royal Park’s newly designed posters have appeared on park entrances and notice boards to warn of the dangers of approaching deer at this and other times of the year.

Even if you don’t have a dog, you could still be at risk if you are close to the deer, particularly if they are rutting. One such park user found out this the hard way yesterday when he was walking near a pair gearing up for a rut, with one of the deer choosing him as the target instead of the usual opponent.

It is rare to catch such incidents on film but Lisa Acremom (interviewed) recorded the drama that had the victim of the attack pleading from help from passers-by shouting “I need some help here”. He eventually found sanctuary by climbing the tree protector to get out of reach of the antlers, police were then called to help but the deer had moved on by then.

Park users should stay well away from deer during rutting season and not assume they can get as close as other times of the year when they are much more docile. 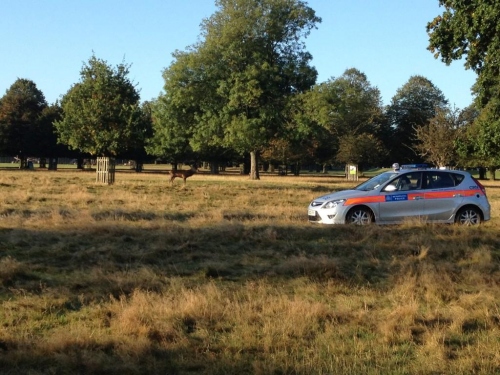