On Saturday night around 10pm several police cars, vans and ambulances descended on Teddington High Street following reports of an assault and a fight involving a large group. A few hours later a second incident also saw a police response after reports of a man collapsed in Field Lane.

Police cordoned off several areas at this side of town – on the green near St Mary With St Alban church (and alongside the almshouses), outside the Royal Oak and the Starbucks end of Field Lane. 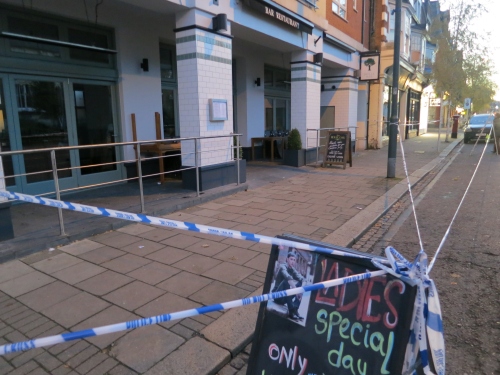 These areas were still cordoned off throughout Sunday as crime scenes and forensic teams were seen working behind the police tape. There are thought to be two separate but related incidents being investigated.

Information has now been released that two men were taken to hospital – one of whom has since been discharged but the other sadly remains in a serious but stable condition. 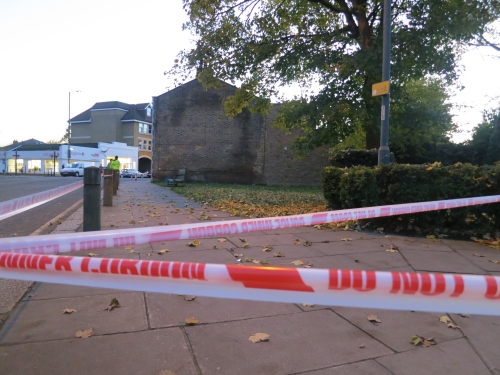 Police have been going door to door asking nearby residents if they have any information. If you witnessed these events or have any information please call the incident room on 02087214155 or contact Crimestoppers anonymously. – see below for update.

[Update 12/11/2012] Radio Jackie are reporting that two arrests were made at the scene of the second incident (Field Lane) at 12:30am. Areas remain closed and in Field Lane residents have to register when moving in or out of this area.

[Update 12/11/2012] Sadly this is now a murder investigation. The 20-year-old victim believed to be from Twickenham (yet to be formerly identified) was rushed to hospital but died during the same night. Two men aged 20 were arrested near the scene and have now been bailed. A third man (21 years old) was arrested in Richmond on Sunday and remains in custody. More details here.

[Update 13/11/2012] Updates & reactions from Richmond & Twickenham Times: all the arrests so far have been for the earlier incident. None have been made as yet for the murder in Field Lane.

This statement has been released by Chief Superintendent Clive Chalk. Contrary to rumours circulating, there is no indication that any weapons were used, or that the attacks were pre-planned or gang-related. Additional police patrols will be occurring in the area to reassure the public during the murder enquiry. As alcohol was involved, a review of licensed premises in the area will be held to ensure that those who visit or live in Teddington can do so safely and without fear.

[Update 13/11/2012] a 20yr old man has now been arrested on suspicion of murder. It is now believed that the victim was injured in the earlier fight managed to stagger away, only to collapse from his wounds where he was found later in Field Lane.

The victim, who died of head injuries in Kingston Hospital, has now been formerly identified by police as St Mary’s University student Patrick Lawless. One other involved in the fight still remains in hospital in critical condition.

[Update 14/11/2012] Flowers have been laid near Field Lane and tributes have been made to “funny and vibrant” and “fitness obsessed” student Patrick. The Monday post-mortem examination has confirmed that the cause of death was “blunt force trauma to the head”. All four individuals arrested in connection with these events have now been bailed.

The Royal Oak’s license has been temporarily suspended by Richmond Council’s Licensing Sub-Committee and it will close until the 20th of November so that additional safety measures can be put in place.

After re-opening, opening hours will be reduced on Friday and Saturday evenings and two door security operators will be required. The Council Committee will then reconsider this case in 4 weeks when more information will be available from the ongoing Police investigation.

[Update 23/11/2012] The landlord of the Royal Oak has spoken of his shock at the fight that broke out outside his pub and led to these events. Only some of the crowd gathered actually bought drinks at the pub, the rest appeared to have drinks from elsewhere.

Although a fifth man was arrested in connection with this incident police are still appealing for witnesses to come forward.

[Update 08/06/2013] Three charged over brawl linked to Teddington murder inquiry – story here and another charged with the manslaughter of Patrick Laweless.

[Update 16/04/2014] The trial has now ended with convictions for manslaughter and violent disorder for those involved in the brawl and death of Patrick Lawless.