Richmond Council is asking for feedback for proposed re-planning schemes for two parks in central Teddington – Elmfield and Jubilee Gardens: these are the green spaces near Elmfield house, where Lights-Up switching-on takes place in November and opposite, near Travelodge.

This work will form part of the Parks Improvement Plan II which aims to improve parks and open spaces across the borough. This work and consultation has been driven directly from the results of the All-In-One survey where locals were asked what they like best about their local area – with open spaces and parks being the top answer. 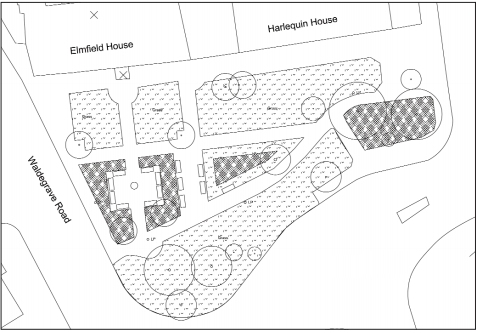 The Jubilee Gardens design was based on a woodland and trees planted here have grown to the point that too much shade was preventing planting underneath – now stripped back and waiting for confirmation of final plans. The seating area could be extended and include new planting. You can add your feedback for either scheme via this online survey by the 3rd of May 2013. 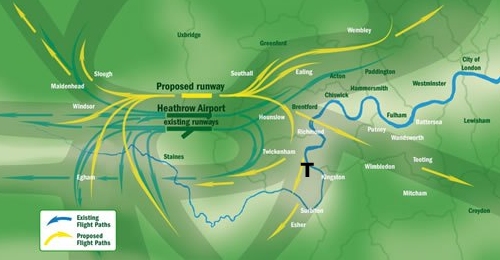 From its humble beginnings in the 1940’s when a small airfield near a small hamlet “Heath Row” was earmarked for a larger airport, combining military and civilian flights. The risk of landing into the prevailing wind (flying westwards) over such a large city was justified at this location because it was linked to an ideal spot to cater for long-range troop-carrying planes, so war-time powers were used to requisition the land.

Heathrow is now one of the world’s biggest and busiest airports but studies have shown that more capacity is needed in the South of England to keep up with demand. On Saturday, 27th April thousands attended a cross-party rally held to protest the potential West London expansion. 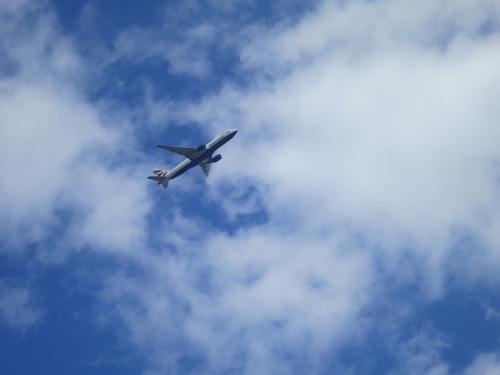 Plane spotted taking off over Teddington, a common sight when the prevailing wind direction changes (approx third of the time)

Richmond Council seeks to involve local people in decision-making in the development of ideas and issues that affect the borough and they are asking that voices “Be Heard” on the potential expansion of Heathrow Airport with the borough’s first local referendum. If you missed the ‘Have Your Say’ information stand on Broad Street, there will be a further one at Chestnut Sunday on the 12th of May – the deadline for this vote is 16th May.

Last week every eligible voter in the borough should have received a ballot card with instructions on how to vote on this issue by post or online. There are facts and estimates concerning the proposals online for you to consider before you vote and you can request a lost or missing ballot card by Thursday 2nd May.

One thought on “Resident consultations: have your say”