Parts of the UK are starting to experience the beginnings of most severe storm in a decade that could see gusts of 80mph and localised flooding in many areas, particularly in the south.

The worst of the weather will hit the south of England overnight and during the morning rush hour – even before the storm had hit land, on Sunday afternoon a tree blocked the train line near Hampton. 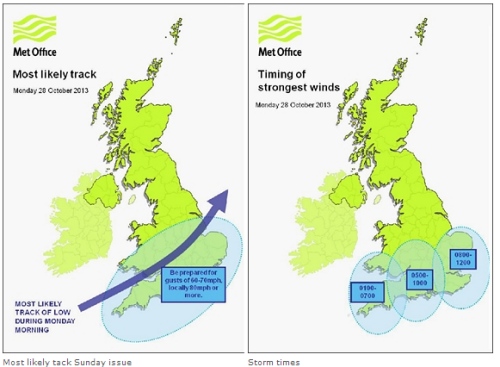 South West Trains are currently advising passengers not to travel unless necessary due to the disruption that the hurricane-force winds and heavy rain will bring. No trains will be running before 8am whilst lines are checked at the start of service and the first train leaving Teddington will probably be at 8:41am, with a reduced and slower service thereafter.

London Overground will similarly not run before 9am and both Heathrow and Gatwick are warning of disruption to flights. Road organisations are also advising against travel but if necessary, drive slowly enough to be able to react to unexpected debris and obstacles in the road. Also check your route before you leave for closure or disruption info. 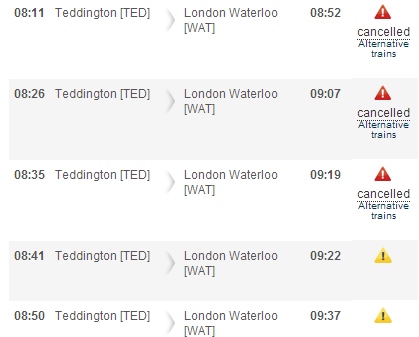 Updates will be posted here on Monday, if you have any local photos, info & updates that affects the area, email contact@teddingtontown.co.uk or tweet @Teddington_Town.

[Update 28/10/2013 08:00] South West Trains are now advising that no trains will run until at least 10am. There are currently 29 trees blocking lines across the SWT network.

Park users are reporting that Bushy Park is currently completely closed – to traffic and pedestrians. Royal Parks say that all parks will be closed until at least 10am.

One of 29 trees blocking routes across our network. This one is at Dorchester South. pic.twitter.com/2l598V8q4W

[Update 28/10/2013 14:20] Latest info: An earlier ‘test’ train ran into obstructions on the line soon after it set-off, but the first services has now left Teddington with passengers on board (1:35pm). Expect delays and cancellations until end of service though.

Richmond and Bushy Park have now re-opened after inspections.

Trees haven’t been the only victims of the wind damage: 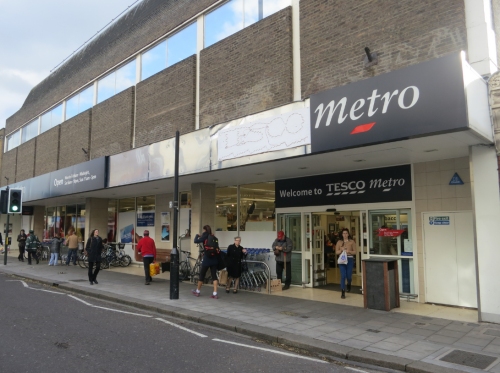 Today the police spotted outside le Bon Gout in the Causeway were enforcing a cordon around the cafe whilst the area was made safe after a chimney stack blew down.