A meeting recently took place between Heathrow and representatives from Teddington including myself, local councillors and a local residents group.

Much information was put forward from both groups, representatives from Heathrow (LHR) were keen to point out that the trials are a response to the mandated modernisation of airspace that many airports in European countries have been told must happen by 2020. It’s clear that LHR have been completely taken aback by the sheer number of complaints received since the trials began at the end of August – at the time they had seen a peak of over 500 complaints in a day, since this has risen to almost 3,000!

It was made clear that if these changes were made permanent, they would have a massive negative impact on residents lives as they had already done. A sample of the types of petition comments were handed to Heathrow grouping these into effects on health, business, schooling, sleep and enjoyment of outdoor space etc. Many locals moved here to escape excessive plane noise from elsewhere and many would move if plan noise increase to these levels long-term. 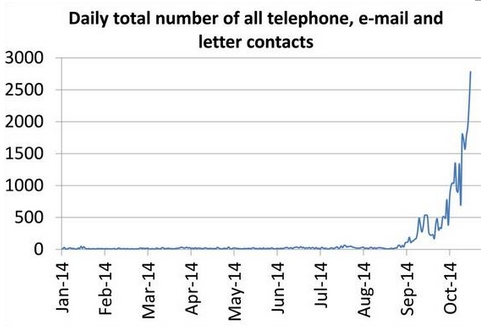 One of the aims of the trials is to help mitigate noise impact, as well as making flight routes more efficient so that when issues to occur, this doesn’t lead to as much plane congestion and departure delays for passengers. Some example postcodes were used to show the before/after tracks of aircraft – to LHR’s surprise, some aircraft were still ‘straying’ outside of the new accurately navigated route.

One area of disagreement was that residents believe that planes are now (individually) lower and louder. This was refuted by Heathrow and they can’t think of any reason why planes are now louder than previously – they did admit that the angle at which they turn may have an impact. But they are 100% sure planes aren’t any lower than pre-trial and have provided two example before/after charts to show the height & frequency of two ‘gates’.

One thing is for sure, Heathrow weren’t expecting such a reaction from changing flightpaths and didn’t predict that concentration would have such an impact on noise – this is worrying because it brings into question any similar predictions for flightpath changes including analysis of who would be affected by increased capacity at Heathrow with a third runway.

The charts below are for a postcode in Cambridge Road – an area where in theory, noise should be improved during the trial if planes are no longer flying directly over the High Street and are now further west over Broad Street/Bushy Park area. As you can see, planes that were originally using route 4 (SAM) are now slightly further away, but the now very-concentrated flight path at 0.9km away is what is causing the increased noise in Cambridge Road. The plane heights are not lower in general in great numbers although there is some variance.

If you are interested in the charts, here they are for two postcodes – with a September sample used for both from 2013 and 2014:

It appears then that the reason why locals experience louder (and potentially more lower) planes is most likely a result of the much more concentrated & combined flight path now being more over Teddington – there are probably more of the lowing flying/larger aircraft over here than before with just the SAM route. One potential trial next year will be for aircraft to use steeper climbing in departure paths, but this may take place as a simulation rather than a real-life trial.

Although the trials will now end early on November 12th, Heathrow will be holding a public meeting in Teddington to discuss these and future trials. The meeting will be chaired by Vince Cable and take place on Monday 10th November 7:30pm-9:30pm at Teddington Baptist Church, Church Road. The meeting capacity will be 200 on a first-come first-served basis. The meeting will be recorded (audio) so if you can’t attend, you will be able to hear what was said after the date.