After details of Heathrow’s easterly departure trials were posted here, it has become increasingly obvious that very few local residents knew anything about the changes to flightpaths before noticing changes themselves. Heathrow have again stated that local groups, councils etc were informed but not provided any further detail than this.

Heathrow’s Community Communications Officer stated that: “Instead of spreading tracks over a wide area, aircraft following more precise routes. The height or number of aircraft using each route is not affected. For people living under these routes it’s likely you’ll experience a concentration of aircraft during periods that these particular routes are being used. They’ll also be people that have less aircraft over them.”

Example maps of one day before & during the trial were also supplied that make the changes more clear: it appears as though the MID and SAM routes are now combined in a concentrated corridor over the west of Teddington.

Heathrow correspondence has confirmed that complaints from residents have been massively higher than expected – perhaps the flightpath changes had more of an effect than even the airport had anticipated. If you feel that the noise continues to be unacceptable, then it’s advisable to continue logging this by emailing
noise_complaints@heathrow.com including your name, address, postcode and phone number.

The trials are driven by the Governments Future Airspace Strategy to simplify and modernise UK airspace by 2020 by making more efficient ways of routing planes, whilst reducing delays for passengers – all made possible by modern navigation systems. What works and doesn’t will be determined by feedback during the trials and via public consultations (likely in 2016) with final decisions to be made by the Government.

[googlemaps https://mapsengine.google.com/map/u/1/embed?mid=z968r0CwbzM0.kNmk9WXxFMF0&w=500&h=500]
.
It’s still not clear why areas that should in theory be experiencing less plane noise are seeing complaints lodged – feedback has been added to the map above after a Twitter survey, with many negative comments from areas between the centre of Teddington and the river, where it should now be quieter. One local resident using a phone app recorded a noise level of 100 decibels near Teddington Memorial Hospital at 11pm on Sunday night!

If you do feel that noise has remained the same, or improved then post your road/postcode in the comments section below and it will be added as a positive (green) marker on the map. 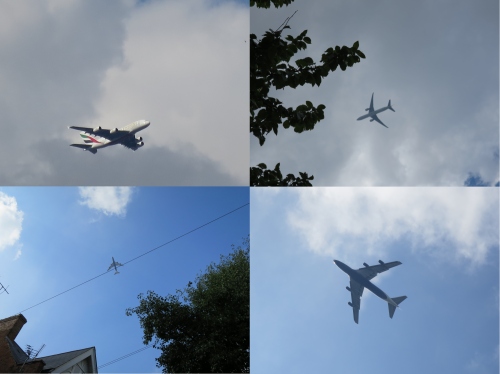 Following complaints and petitions such as City Airport and this one from Ascot residents to cease trials for Westerly departures, a petition has been created to create awareness of the noise created by these trials and to persuade Heathrow to cease them and not make the changes permanent. You can sign the petition here if you agree. Complaints are being lodged from Teddington, Strawberry Hill, Twickenham, Hampton Hill, Molesey and Ham.

[Update 17/09/2014] The petition has amassed over 2,500 signatures in a few days and they have been added from many nearby towns also affected by the increased noise including Hampton Hill, Ham, Twickenham, Molesey and Kingston. First 3,000 responses mapped (click to enlarge): 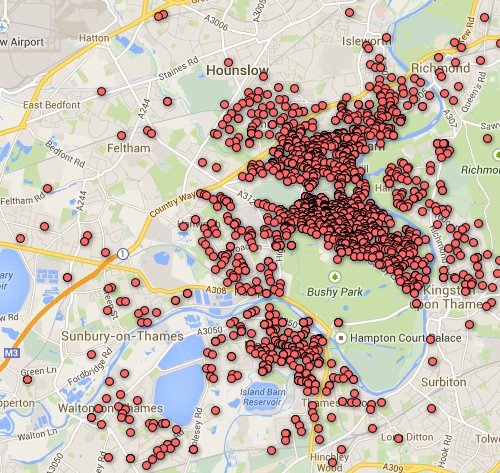 The comments added to signatures are showing affect how much the flightpath changes are having to local residents:

“The noise of the planes going over our house that we have lived in for less than one year causes significant distress, depression and have a massive impact on the quality of our lives – we are devastated that this has just happened as we have moved to the area and it genuinely affects my mental health. Please reconsider it is driving me mad”.

“The increase in noise has destroyed our family life. My 2 year old struggles to sleep (as do we!), we have to interrupt conversations. The planes are so low we can count their windows! Please please stop”.

“Because the planes are VERY loud over my house. It affects me & my family when we’re playing outside because my kids can’t hear me speaking when a plane goes by. I work from home & even with the windows closed I find it hard to hear when I’m on a business call”.

“I personally moved from Richmond to Teddington to escape the excessive and constant noise from planes, which I found stressful and bad for my health. I now have an adopted daughter who suffers with sensory integration disorders, especially noise, and we are both finding this excessive and continuous plane noise over Teddington lately, extremely stressful and having a huge effect on our sleep, health and well-being. We love living in Teddington. I find it absolutely outrageous that we would have to move again if this noise continues, especially after all that my adopted daughter has already had to suffer in her life and now that she finally feels happy, settled and making friends in Teddington!”

“We moved from TW7 area to KT12 a year ago to escape the noise of aircraft. I accept we live in the vicinity of an airport so can expect a certain amount of noise but recently it has been constant and irritating. I have never been contacted by any ‘body of authority” and only recently found out myself through searching our local forum and this website. I feel that this trial and has been conducted unfairly and behind our backs.” 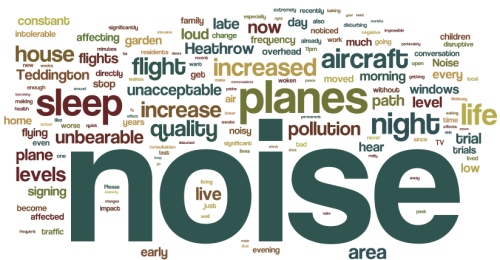 Most popular words from signature comments

[Update 18/09/2014] From comments concerning the trial routes, some areas are indeed better off due to the changes – some residents of Isleworth, Bedfont and St Margarets have noted that it seems quieter now. An average of 350 complaints a day have been sent to Heathrow since the trials started.

Another before/during example map was released today (see above) and some figures too – route 4 (SAM) is normally the main route over Teddington usually gets 32 flights a day when on Easterly operations. This has been merged with route 5 (MID) which gets 110 per day. So that would mean 142 per day for this path now, an increase of 443% for those living underneath.

Heathrow have announced that a meeting will be held in Teddington, details to follow soon.

We’ll be holding a public meeting on 13 October at Ascot racecourse. We’d also like to arrange one in Teddington. More details to follow.

Matthew Gorman, Director for Sustainability and Environment for Heathrow has responded to trial feedback (original article deleted! Screenshot of this here: “I mean the first thing I would like to say is to apologise to residents who have experienced a bit more noise as a result of the flight trials that we’re doing“.

@VivGroskop @wardhaugh at the end of the trial, flights will return to usual patterns. We're looking to see if trial can be shortened.

[Update 23/09/2014] There has been some respite from the noise after the wind direction changed at the start of the week – this is set to last a few days, (not determined by the reaction to he trials!).

LBRUT (already opposed to a third Heathrow runway) are pursuing whether the trial is legal without first any consultation, and will then consider what action is available depending on this decision. They have also noted that although the flightpaths have moved, they still remain within the legally designated ‘noise preferential route’ 3km wide swathes.

The petition has amassed over 5,000 signatures in just one week, showing the numbers affected by the longer flight hours and increased noise due to the trials. Reading through the comments it’s clear the trial is having a dramatic effect on residents, their sleep, health, schooling and businesses, to the point that some have started they would move if the new trial routes are made permanent.

Comments are falling into some distinct categories – some examples of each are included in this document which will be presented to Heathrow.

Heathrow have updated their website to include more info and also this timeline that shows that this is actually one of many trials that are set to continue into 2016. 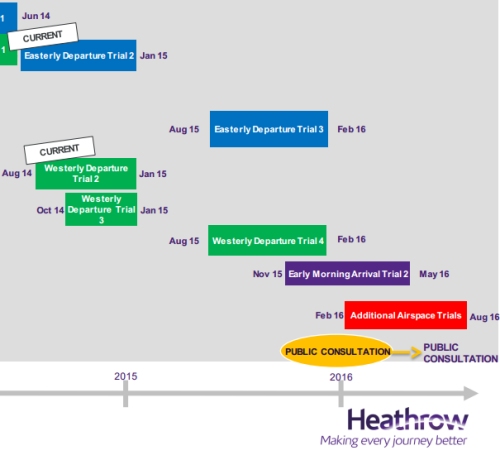 [Update 29/09/2014] In advance of a public one (TBC), an invite for a meeting with Heathrow has been sent to teddingtontown.co.uk along with some local representatives this week, if you have any specific questions/issues you wish to be put to Heathrow then reply below.

The article where LHR representative Matthew Gorman apologised for ‘a bit more noise as a result of the flight trials’ has been removed but we managed to keep a screenshot of it here for prosperity.

As well as potentially concentrating flight-paths as they are currently trialling, Heathrow stated last year that they also want to end the preference for running westerly departures when the wind isn’t strong enough to determine east or westerly departures. This would mean the current easterly departure times previously around 30% of the time would now have an additional 5% of flights. This doesn’t sounds like much but this is actually an increase of 17% of the times when planes take off to the east and over Teddington & surrounding areas. Coupled with the potential to be louder and longer hours, this is of great concern.