Although plane noise itself has quietened down recently due to a prolonged period of westerly winds (with planes taking off towards the west) the threat of changes at Heathrow still hangs over us.

In October representatives from Heathrow and Air Traffic Management (NATS) held a public meeting in Teddington so that locals could discuss the issues brought up by the 2014 departure trials. The capacity crowd certainly let their feelings known and the overall impression was that Teddington residents had been extremely disturbed by the noise intrusion, and flabbergasted that Heathrow hadn’t first informed individuals that the trial was even taking place.

Some of the more passionate speeches included the tale of one particularly exasperated local who turned up at Heathrow offices with a boombox, playing loud music every 30 seconds to emulate the sound of planes over his house, until representatives agreed to speak to him. Many residents objected to Heathrow’s mention of ‘noise modelling’ that was used to predict the effects of the trial and performance based navigation (concentration) – Heathrow admitted that this didn’t work as they intended. 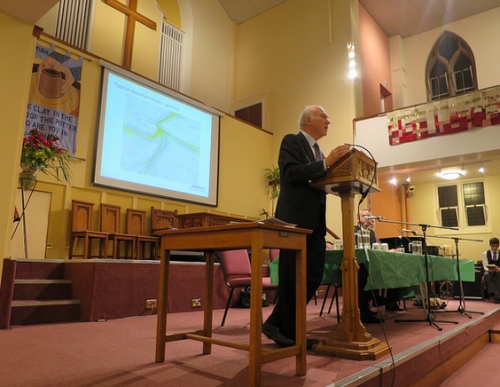 Heathrow’s response to many questions and feedback was that the flight-paths over Teddington and other areas weren’t specifically being tested but instead the navigation methods (particularly the 80 degree turn) were instead being trialled. They did however acknowledge the significant reaction to trials and apologised for this, promising to publicise future trials and inform affected residents.

A full audio of the meeting, hosted by Vince Cable can be downloaded and listened to here and the presentation viewed here.

Although the initial trials are behind us, more may take place and a public consultation in 2016 will help determine where flight-paths will be by the 2020 mandate.

An issue very much related to this is the potential expansion of Heathrow. Until the trials took place, many locals didn’t even consider that expansion might have an effect on the area but the moving and concentration of existing paths had such a huge effect that expansion is now on people’s radar. 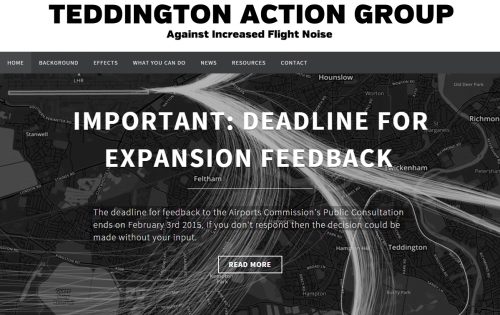 After the public meeting, a new community group was formed to represent those who would be affected by both expansion and concentrated flight-paths in the area – Teddington Action Group.

Much work has been going on behind the scenes by the group to evaluate the potential effects of these issues. The government has commissioned a report into which location might suit an additional runway best – this has already been narrowed down to either of the two Heathrow options and one at Gatwick. The commission has asked for “your views on the 3 options for a new runway and on its assessments of these options” listed in the initial published analysis but at many hundreds of pages of complex technical and economic (and a disturbing lack of health) info, the TAG group have read through these in detail and produced guidelines on how to respond to the commission.

The amount of feedback as well as the main issues and points raised will be reported on in the next stage of the commission so if you feel strongly about the potential effects of Heathrow expansion, you are urged to respond via the consultation – here is a handy guide on how to do this and what issues you could focus on. Responses can be emailed or sent by Freepost. The deadline for sending your feedback is February 3rd at 11:45pm.

Heathrow expansion could increase flights by an estimated 54% from 480,000 to 740,000. There have been some illustrative flight-paths included in the report but no detail – it is currently unknown which communities (new or existing) would be affected by the increased plane numbers, but it’s likely that if combined with the new concentrated flight-paths, they could have a very detrimental impact on areas such as Teddington.

Disturbingly, using the measurement standard 57 LAeq that the Davies Report uses Teddington, Twickenham and other nearby towns aren’t within the contour those currently affected and are ‘relatively unaffected by aircraft noise‘, something locals might disagree with and particularly when flight-paths are combined and concentrated! This method measures noise on days when planes are flying over and when they are not. As planes take off towards the west 70% of the time, this means that these days when planes aren’t overhead bring down the average noise levels. The overall number of affected people is 250,000 using this method.

Using the European standard 55 Lden noise method (only measuring plane noise when they are actually overhead), our area is indeed included in those affected by noise nuisance and the overall number of residents affected by plane noise around Heathrow rises to over 750,000. This startling number makes up 28% of all people affected by aircraft in Europe!

There is a special all-parties standing committee meeting at York House in Twickenham this week (22nd January 7pm) – see here for details and register if you wish to speak.

See here for info on how you can help with the campaign and get involved in the group.