Locals were surprised to wake up to various signs around Teddington delightfully framed in gold today.

These have been spotted by the river, Bushy Park, centrally and in Cambridge Road around road signs, dog and cycle notices. Have you seen any more? Email contact@teddingtontown.co.uk if you spot any. 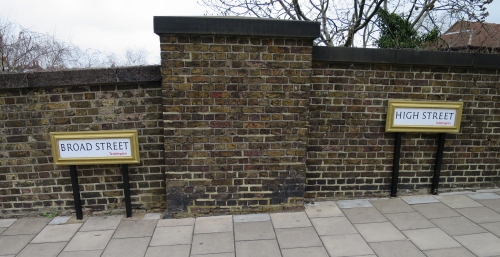 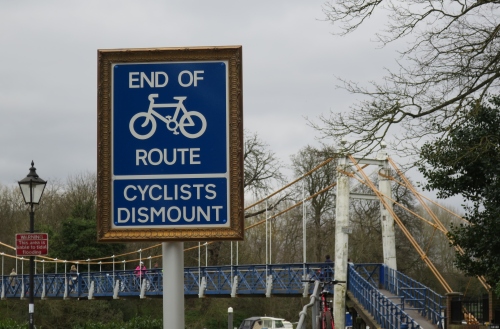 More found near the station: 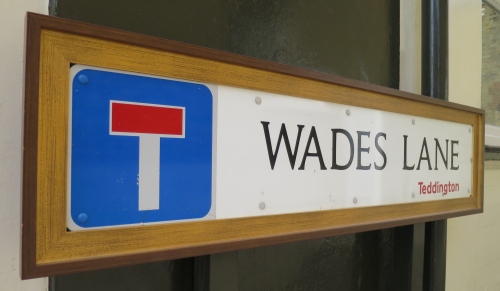 [Update] The so-called ‘Phantom Framer’ has set up a Twitter account and is hinting at where as yet undiscovered frames are. Some have been removed (including the Broad St/High St ones) after residents spotted who was thought to be council workers photographing the signs.

Oh dear #teddington someone has been removing my beautiful frames!

What should I do
#phantomframer

The story is being covered in the media including ITV, The Standard, The Mirror and on TV via ITN News. The Phantom Framer himself has spoken out to say “Teddington is beautiful town and I wanted to prove that even the most mundane things can be beautiful.”

Richmond Council have now removed most of the signs and have commented “As beautiful as these frames looked across Richmond they had to be taken down as they are not in keeping with our corporate policy for street signs and logos.

Whoever is responsible has spent a considerable amount of time and money on these frames. They had been fitted perfectly at 13 locations across the borough. We have them stored safely at our sign shop ready for collection – should the owner want them back.”

The “gilded superhero” has hinted that more signs might appear again because of the positive reaction the frames have received.

There is now an online petition to ask that the Council don’t remove any signs that have started appearing again in Teddington.

It seems the police in @Teddington_Town are happy to walk on by the @PhantomFramer 's work. The council take them. pic.twitter.com/K1tQ2cwfI4

The @PhantomFramer has been busy in @Teddington_Town Nothing like a spot of frame spotting of an evening! pic.twitter.com/EMFurW0tD3

The story has been reported on by the BBC who asks “Is the Phantom Framer a vandal or an artist?”. 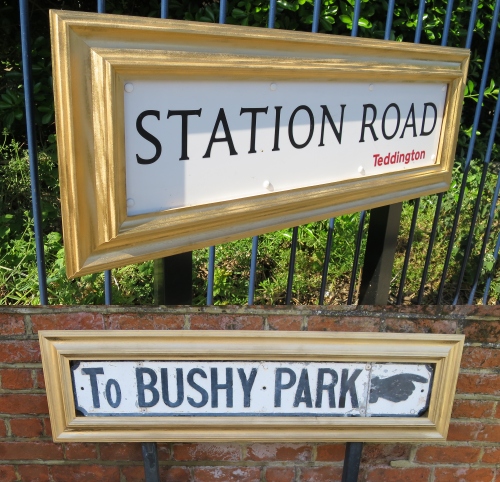 As more frames appear under the cover of darkness, the council seem to be softening their position on removing them quickly, with some remaining in place for several days.

Local news reporter Faye Barker has exclusively revealed that there are actually two Phantom Framers during an interview for ITV news. The piece contains a tantalising glimpse of the framers wearing masks along with the promise that “this is just the beginning“. You can view this online here:
www.itv.com/news/2015-04-22/meet-the-elusive-phantom-framer-s-of-teddington.

If you have been following @PhantomFramer I can tell you there are two of them. Interview on @itvnews 1:30 today pic.twitter.com/M5FMTlQBfj

The Phantom Framers have struck again, leaving a gold frame hanging from a tree in Udney Park Gardens and encouraging locals to take a #phantomselfie. Hurry though, the frame will be disappearing on Wednesday 6th.

[Updaet 12/05/2015] The Phantom Framers have revealed their identify in this R&T Times interview – from But is it Art framing shop.

0 thoughts on “Who is the mystery Teddington framer?”