Motorists today found themselves in long tailbacks after an incident in central Teddington. Just before 9am a female cyclist in her 60’s was knocked off her bike on the roundabout between Waldegrave Road and The High Street.

Police were called to the scene and arrived within a few minutes. The woman was given a blanket to keep warm and not moved from the spot due to her injuries. Drivers of vehicles being managed past the scene were surprised to see the injured woman on the ground for so long. 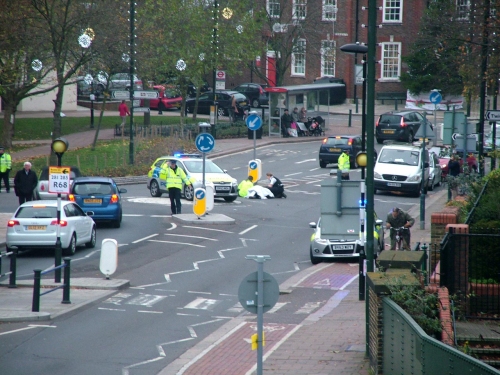 Met police spokesman: “We were called to a collision between a car and a cyclist in Broad Street at the junction with Waldegrave Road at 8.51. The cyclist, a woman in her 60s, was treated at the scene for serious injuries.”

The fact that the ambulance didn’t arrive on the scene until 90 minutes later at 10:25am, is causing headlines as have cuts to the ambulance service in recent years. 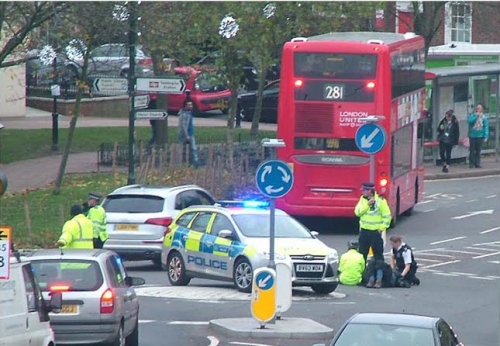 The nearest ambulance station is at Fulwell (next to the Fire Station) and Kingston A&E is three miles from Teddington. The approaches to this roundabout were redesigned two years ago to make it safer for cyclists. 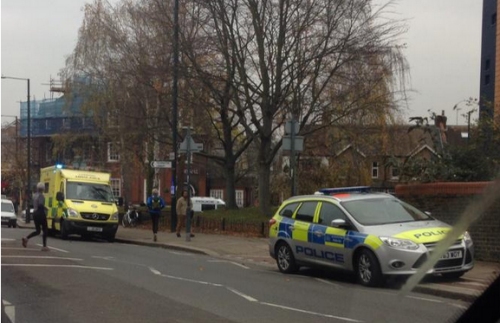 I am sad but not surprised someone has come off their bike at the roundabout opposite #Teddington station… Hope they are OK!

Sad sight in #teddington. Lady cyclist knocked off on the mini roundabout. Traffic backing up to Hampton hill. Do take care

[Update 01/12/2014] A Statement from The London Ambulance Service details how two ambulances were dispatched to the scene but both were unfortunately diverted to more serious cases:

“From the information provided, we were told the patient was conscious, breathing and alert.”

“We are very sorry we couldn’t be there sooner and for any distress or discomfort this may have caused but we have to prioritise patients in a serious or life-threatening condition.”

[Update 02/12/2014] See here for an interview with the cyclist in question Angie Cook who ironically is a cycling safety instructor who was on her way to teach cycle safety at a Teddington School when she was hit by a Vauxhall Zafira. Angie spoke of the “shambles” of NHS funding and the impact it was having on care.

“When the paramedics did come they were very apologetic, they told me there weren’t enough ambulances. They said it was a nightmare and last Friday there were 6,000 calls and only 300 ambulances to deal with it. I’m sympathetic to them.”

0 thoughts on “Cyclist knocked down in rush hour traffic”